THE HOLY CAVERN OF TROODITISSA

It is a well known fact that during the Iconoclastic Controversy, the policy of iconoclast emperors had forced many pious clerics and laymen to seek refuge to relatively peaceful areas such as Cyprus, where the veneration of the holy icons was still allowed. Their aim was to salvage the miraculous icons from the wrath of the iconoclasts.

The holy Cavern in a rocky area.

It was then that a Monk had brought to Cyprus an icon of Panagia, that later obtained the eponym “Trooditissa”. The Monk took shelter at the Monastery of St Nikolas “of the Cats,” near the village of Akrotiri, in Limassol. There he stayed for several years until, guided by Theotokos, he left for the mountains of Troodos, where he was to carry the miraculous icon to the place where he would see a column of fire, and spend the rest of his days there.

The Monk eventually reached a cavern to the Northeast of the Monastery, on the way to the village of Platres. The cavern, wherein he lived until his last breath, was formed as a natural cavity below an immense, fallen piece of rock.

Of note is the fact that this cavern, which was later named “The Cavern of Trooditissa”, has been associated with the presence of ascetics in the area, as shown by the monks’ chance discovery of a tomb in its interior, on 14 February 1949. On that day, the monks set out to expand the cavern by moving soil, in order to make it more accessible to pilgrims. While digging, they found a tomb with the bones of two men, as well as three clay vessels, dating from the 16th century, today kept at the Cyprus Museum. These finds corroborated the assumption that, from time to time, anachorists had stayed in the cavern, a place inspiring ascetism and prayer, hesychia and contemplation, in order to fully devote themselves to the monastic ideal.

The entrance to the holy Cavern (today).

“The Cavern of Trooditissa” which, according to tradition had sheltered the first Monk, and subsequently other ascetics, was renovated in 1972 by Hegumen Athanasios at the expense of princess Zena Kanther.  A cenotaph in memory of the two ascetics was placed on the interior side of the cavern. The position of the Cavern opens up to an excellent view, from where pilgrims can gaze at the south coast of Cyprus, more particularly the area of the Monastery of St Nikolas “of the Cats,” where the first Monk had found shelter. 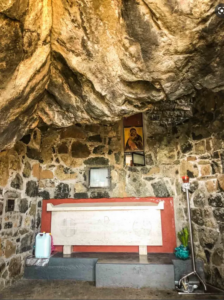 The cenotaph inside the holy Cavern.

According to tradition, the cavern was from times past devoted to the Transfiguration of our Saviour and until the early 20th century, it was officiated on this feast-day, namely the 6th of August. As we know from the history of the Monastery, after the church was built, the old miraculous icon of Trooditissa was placed on the templon (iconostasis) to the right of the Beautiful Gates. Later, at a time unknown to us, another icon of fine art, dating from the 16th c., was placed in the Sacred Cavern and went on to acquire the eponym “Panagia of the Cavern.” For precautionary reasons, in the mid-20th c., this icon was replaced by a different icon that bore the inscription “Our Lady of the Angels,” painted in 1954 by the present-day Hegumen, Athanasios.

Unfortunately, the icon of “Our Lady of the Angels” was stolen on 28 May 1961 by desecraters who apparently struck it with a hard object and scraped it, causing extended damage to the painting. On 24 February of the following year, the icon was found discarded in nearby bushes, by Public Works employees who had gone there to check the solidity of the rocks. The workers related that when two of them had tried to pick the icon up, it miraculously became impossible to lift.

Our Lady of the Angels, a work of Hegoumen Athanasios.

Their supervisor intervened, lifted the icon, and made sure it was delivered to the Monastery.

The two workers were convinced that their inability to lift the icon was due to a grave sin that had rendered them unworthy to serve Theotokos – and this eventually urged them toward confession and spiritual rebirth.

Even though “Our Lady of the Angels” had remained exposed to the elements of nature for almost nine months, especially during wintertime, she suffered nothing but the damage inflicted upon her by the desecraters. The icon was later covered with a silver revetment and placed on the Katholikon’s (main Church of the Monastery) icon-stand, whilst another icon of the Virgin Mary was placed in the Cavern.

Your ticket for: THE HOLY CAVERN